AV-Comparatives knows malware. As they explain in their latest Malware Protection Test report, the Austrian-based testing lab collects “recent, prevalent samples that are endangering users in the field.” Then, they send cutting-edge, malicious files into battle against popular cybersecurity software. Who will be left standing?

To prepare for their March 2018 Malware Protection Test, the lab collected no less than 20,046 malware samples for an epic “battle of the tech” against 18 consumer products. AVG Free Antivirus was in that arena and emerged with a ranking award of “Advanced +” — the highest AV-Comparatives gives. 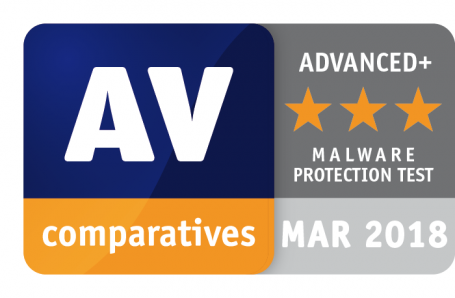 For this study, “malware protection” encompassed all stages of the malicious samples’ introduction to the system — before, during, and after execution. By observing each stage, the lab got a holistic picture of the security capabilities. In some cases, an antivirus didn’t recognize a malware that was inactive, but detected and blocked it once it activated. The test allowed each software product to fully use its resources, including cloud-based detection mechanisms, so that every last line of defense was given a chance.

AVG Free Antivirus performed better than average in every category, protecting against all 20,046 samples and scoring an Online Protection Rate of 100%. Even though the malware samples were new and amped up with the latest sophistication and dirty tricks, AVG left every one of them blocked and neutralized.

False positives occur when an antivirus mistakes a safe file for an infected one. Your antivirus software should have a minimum of these, or else you’re dealing with unnecessary headaches on a fairly regular basis. AV-Comparatives always checks for false positives, and for this one, the average amount each product had was 50. AVG, however, only had nine, proving that it knows good from bad much better than most.

And while our software’s performance in this test was excellent, it was also consistent: we got the same score on the same test back in September 2017.   Consumers can  download AVG Free Antivirus today, fully loaded for maximum protection yet refreshingly simple for ease of use.